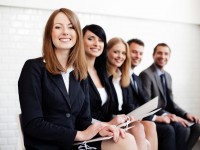 STANFORD, CA–Campus recruiters this week once again began their tri-annual journey to Stanford to recruit some of the most talented minds in the country, and they certainly weren’t disappointed.  The Class of 2017, with their impressive resumes and backgrounds, were these recruiters’ top choices in the scramble to offer students positions at their companies.

“As soon as I saw the ‘undeclared’ on Ben Davidson’s nametag, I instantly knew that he was the right man for the job,” said Shell recruiter Amy Fenton. “And when I saw his bright red lanyard, he had to be qualified.  Stanford doesn’t just hand those out to everyone, you know.”

CDC spokesperson Robert Jameson commented on the qualifications of the members of 2017, saying, “It isn’t every day here at Stanford that you see a National Merit Scholar or someone whose dreams and aspirations were clearly and eloquently shaped by the ‘world’ they came from.” Jameson went on to say that a large majority of these job-seekers held leadership positions on their high school’s student government. “I’ve never seen so many treasurers,” Jameson recounted in awe.

However, not everyone is happy contending with Stanford’s newest and most qualified batch of admits. Chemical Engineer Stephen Levinson wonders how he will get a job with this added pressure: “I’m about to graduate with honors, after completing a 130-unit degree. But competing with someone who took three AP courses? I mean, I knew competing with Stanford students was going to be tough, but hell, who can get a job with people like that in the pool?”