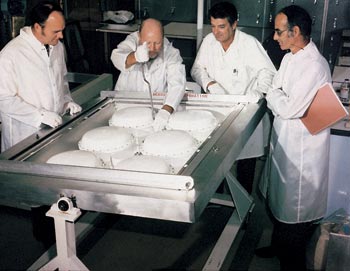 VARIAN BUILDING–After hours upon hours of equations and tinkering with nature, the Stanford University physicists emerged from the depths of the Varian basement with a solution to one of the most pressing university problems: How to calm down the insane annual event that has come to be known as Full Moon on the Quad.
University scientists knew that the answer would come only if they could find away to create a relative lunar shift such that the full moon would fall the day before the first large exam of the year: the midterm. It took the entire Physics Department as well as several interested members from the School of Earth Sciences to figure out a feasible way to alter the first full moon. Through some high-level special relativity and gravitation, they successfully altered the date of the first full moon by four days.
“It really was a university-wide effort,” said chairman of the project, Walter Greene. “The administration was behind us, and we all really felt the importance of making the moon conflict with the first midterms.”
Students who were affected by the coinciding of the full moon and the midterm had harsh feelings towards the project. “I had my chem midterm the day after the full moon. Who can go drinking and partying and making out in that situation? I just had to opt out.”
From the way that the Full Moon on the Quad turned out, it was evident that it was the tamest event in years. University officials were very happy with the success of this moon-shifting project. “I think we made the most people possible miss the event.” said President John L. Hennessy. “And that is what I call a success.”