After a yearlong survey conducted by R&DE with data collected by the housing staff, a startling result has been concluded: on average, Stanford students, especially male students, seem to experience difficulty aiming into the bowl. After receiving complaints about the staining and yellowing bathroom floors around campus, R&DE has begun to investigate this alarming fad among the Stanford student body. See the graph below for a typical toilet bowl the cleaning staff looks at Monday morning. 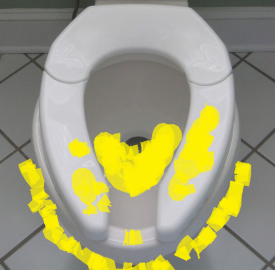 Reasons for this phenomenon are not clear but speculations abound. One theory states that the fast-paced, stressful environment of college life causes Stanford students to not take take proper aim when in front of the toilet bowl. Another theory proposes that young people who think outside of the box also tend to pee outside of the bowl. Some medical experts speculate that high achieving students are statistically more likely to have crooked penises. No matter the reason, this trend is here to stay.

The study shows great variation among different locations on campus, with chilling accounts of urine disaster in the bathrooms of Old Union, while bathrooms in Tresidder are fairing just fine.