Claiming the artwork was misunderstood and misrepresented, the school administration finally dispelled the confusion surrounding allegedly ‘vulgar’ drawings on bathroom stalls. Found mostly in male bathrooms, these drawings — usually consisting of two circles and an unnaturally long ellipse — were originally thought to have been drawn by Palo Alto High School boys as self-portraits of their genitalia. 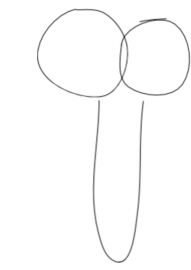 Rough representation of the drawing in question

While this supposedly graphic graffiti has been a largely contested topic for much of the school year, parents only recently caught wind of these graphic sketches. In a tense parent-faculty conference with increasingly nervous parents, a very relatable principal stopped in the middle of his “Snapchat, Hashtags, and #Millennials” lecture and soothed parents’ worries.

“I know you as parents worry dearly about the contents of drawings recently found on the bathroom stalls,” he explained, “but I would like to clear the air and say that these drawings are not those of vulgar male genitalia. We as a school are above this sort of behavior. This is a phony phallus.”

One parent, however, was not satisfied. A few minutes after the principal’s announcement, the parent showed him a picture of one of the stall drawings and exclaimed, “As a mother of two, I fail to see how this does not qualify as a penis!” Keeping his cool in the midst of the unwarranted interruption, the principal calmly assured parents that “these drawings were merely an art exercise.” He then pulled up the allegedly vulgar picture on the mother’s phone and paused for a dramatic two minutes. As confusion and discomfort reached its peak, the principal began a reasoned rant:

“Alright, how isn’t this obvious to you? I fail to see how these conjoined geometric shapes could be viewed as anything other than an elephant without ears.”

He spent the next hour looking up pictures of elephants to bolster his assertion.

We contacted Palo Alto High School’s principal for a comment, but he was too busy to put in a word. However, we did present him with the above sketch of the drawing in question, and to prove his argument that the original drawing was an elephant without ears, he added them to show the uncanny similarities. 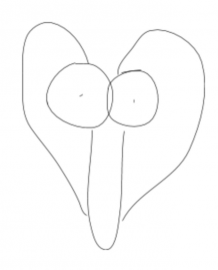 Drawing after the principal’s edits