Nation Nervously Looks On As Trump Appoints Horse To Senate, Takes Up Fiddle

Growing more uneasy with the decision each passing day, Washington insiders have reported that Trump declared his intent to replace Rand Paul (R-KY) with his purebred stallion, Amazing Horse, after Paul’s decision to vote against the Republican party line on a healthcare initiative. This news is worryingly timed, as leading news source Buzzfeed broke the story only twenty minutes after reporting Trump’s desire to learn how to fiddle, specifically how to fiddle in the presence of burning objects.
“Amazing Horse is a great horse, just wonderful, and he’s going to be an even better senator. Way better than Runty Rand. Sad!” tweeted the president-elect, before adding “Skipping today’s FB-Lie briefing to go practice my open-fire fiddling #MAGA #Americasinstrument”.
Constitutional experts are uncertain as to how or if Trump can actually replace a senator with an American Saddlebred, but they do note that nobody seems prepared to stop him and the Constitution does not expressly say he can’t do this. Nor is this pronouncement necessarily the president-elect’s most disturbing, for as of Sunday night Trump has also announced that he intends to move the capital farther east, replace all of the water-pipes with lead, launch several new wars in the Middle East and Europe, insult the Huns and the Goths, and introduce Christianity as the state religion, but not before he butchers an albatross, short-changes a rat exterminator, cuts open a golden goose, backstabs a genie, and desecrates an ancient Indian burial ground.
As of press time, Trump has sent one final tweet, saying “Glad to have finally made it across #riverRubicon with my best generals. #ScaredLittleSenate, #AleaIactaEst.” 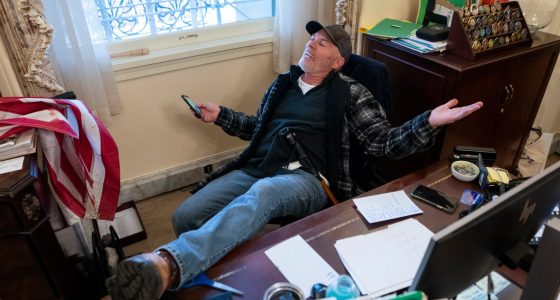 Hey, you—yeah, you! The jackoff with the ear that looks like a…